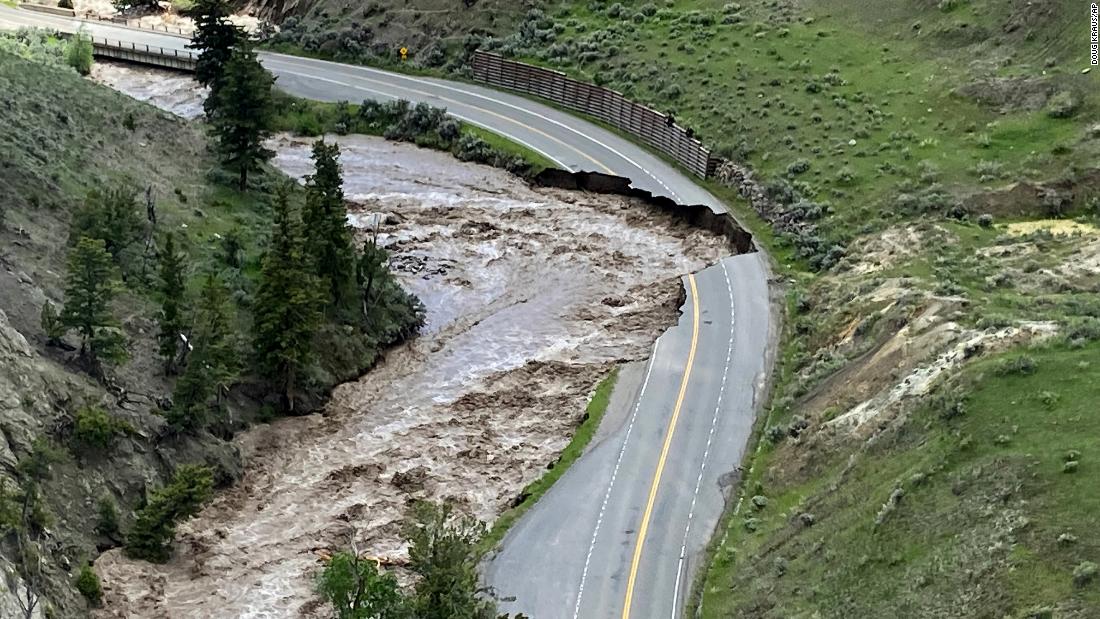 Unprecedented rain and rapid snowmelt in recent days have caused rivers in parts of Montana, Wyoming, and Idaho to burst their banks, swallowing bridges and sweeping away entire sections of roadway.

More than 10,000 visitors to Yellowstone National Park have been forced to evacuate. All entrances to the park are expected to remain closed until at least Monday.

Farther downstream, “the Yellowstone River at Billings was between the 1% (or 1 in 100-years) and 0.2% (1 in 500-years) flood,” according to the release, which pointed out streamflow data is “currently being reported as ‘provisional’ until followup analyzes of the stream channel and data are completed.”

However, Chase noted in the release, “while these floods are often referred to as greater than (or rarer than) a 1 in 500-year event, there is the same probability that they could occur in any given year.”

The USGS frequencies are calculated from historical data for the Yellowstone River’s locations. As CNN has reported this week, scientists have shown climate change is impacting the frequency at which extreme weather events occur, and the trend is expected to continue as the planet continues to warm.

In a three-day period last week, Yellowstone National Park received about two to three times the typical rainfall for the whole month of June, and precipitation this month has already been more than 400% of the average across northwestern Wyoming and southern Montana, according to the National Weather Service.

All five Yellowstone’s park entrances repairs remained closed Friday as flood recovery and efforts are underway in preparation for the park’s reopening, according to a release from the park’s superintendent’s office.

According to the release, the National Park Service does not yet have an estimated reopening date for the entire park — nor an idea of ​​total repair costs. The release outlines an extensive list of needed repairs to roads and infrastructure in each section of the park in order for it to reopen.

“We have made tremendous progress in a very short amount of time but have a long way to go,” Superintendent Cam Sholly said in the release. “All emergency and life safety objectives within the park have been accomplished or stabilized within the first 96 hours of the flood event, without major injury or death.”

The park service announced on Saturday the south loop of the park will reopen to the public on Wednesday.

Backcountry areas accessible from roads open to the public will be available for day use only, according to the release. Overnight use from trailheads in the south will open on July 1.

While the north loop is closed, “park staff have engaged over 1,000 business owners, park partners, commercial operators and residents in surrounding gateway communities to determine how to manage summer visitation,” the park service said.

To ensure the south loop does not become overwhelmed by visitors and to balance the demand for visitor access, the park will institute an interim visitor access plan,” according to the release.

“The interim plan, referred to as the Alternating License Plate System (ALPS), was suggested as a solution by gateway communities during major public engagement with the park this past week,” the release read.

Montana Gov. Greg Gianforte struck an optimistic tone about encouraged flood recovery and rebuilding as he continued tourism to the Big Sky State. The “best days are ahead of us,” he told reporters Friday.

“We’re open. You’ve got to come,” Gianforte said of Yellowstone Park. “The vitality of our communities depends on it. We’re open for business, and we want you to come.”

Officials have previously said the northern section of the park will likely remain closed through the remainder of the season.