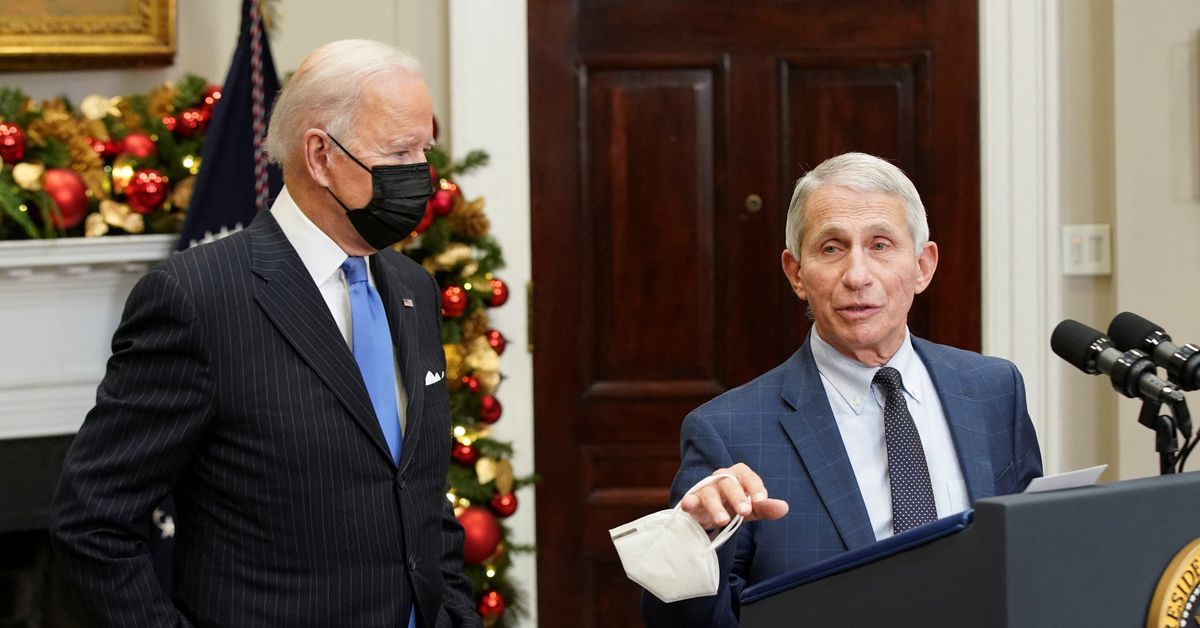 Aug 22 (Reuters) – Dr. Anthony Fauci, the top US infectious disease official who became the face of America’s COVID-19 pandemic response under Presidents Donald Trump and Joe Biden, announced on Monday he is stepping down in December after 54 years of public service.

Fauci, whose efforts to fight the pandemic were applauded by many public health experts even as he was vilified by Trump and many Republicans, will leave his posts as chief medical adviser to Biden and director of the US National Institute of Allergy and Infectious Diseases (NIAID) ), part of the National Institutes of Health (NIH). Fauci, 81, has headed NIAID since 1984.

The veteran immunologist has served as an adviser to seven US presidents beginning with Republican Ronald Reagan, focusing on newly emerging and re-emerging infectious disease dangers including HIV/AIDS, Ebola, Zika, monkeypox and COVID-19.

Fauci hardened criticism from Trump and various conservatives and even death threats against him and his family from people who objected to safeguards such as vaccination, social distancing and masking that he advocated to try to limit the lethality of the COVID-19 pandemic. After defeating Trump in the 2020 election, Biden made Fauci his chief medical adviser.

“I definitely feel it was worth staying as long as I have. It is unfortunate, but it is a fact of life that we are living in a very, very divisive society right now,” Fauci told Reuters on Monday.

Fauci said he never considered resigning due to the threats against him.

“I don’t like the idea that I have to have armed federal agents with me. That’s not a happy feeling. It’s reality. And you’ve got to deal with reality,” Fauci said.

Republican lawmakers including fierce critic Rand Paul, with whom Fauci tangled during Senate hearings, vowed on Monday to investigate him if they gain control of either the House of Representatives or Senate in November’s congressional elections.

“As he leaves his position in the US Government, I know the American people and the entire world will continue to benefit from Dr. Fauci’s expertise in whatever he does next,” Biden said in a statement. “The United States of America is stronger, more resilient and healthier because of him.”

Fauci signaled his impending departure last month, telling Reuters he would withdraw by the end of Biden’s first term, which runs to January 2025, and possibly earlier. read more

The United States leads the world in recorded COVID-19 deaths with more than one million. In the first months of the pandemic in 2020, Fauci helped lead scientific efforts to develop and test COVID-19 vaccines in record time and took part in regular televised White House briefings alongside Trump.

Fauci became a popular and trusted figure among many Americans as the United States faced lockdowns and rising numbers of COVID-19 deaths, even inspiring the sale of cookies and bobblehead dolls featuring his likeness.

However, Fauci drew the ire of Trump and many Republicans for cautioning against reopening the US economy too quickly and risking increased infections and for opposing the use of unproven treatments such as hydroxychloroquine malaria.

Democrats accused Trump of presiding over a disjointed response to the pandemic and of disregarding advice from public health experts including Fauci. Trump in October 2020, weeks before his re-election loss of him, called Fauci “a disaster” and complained that Americans were tired of hearing about the pandemic. Trump even made fun of Fauci’s off-target ceremonial first pitch at a Washington Nationals baseball game.

Fauci sometimes publicly contradicted Trump’s statements about the pandemic. Fauci said on Monday that while he respects the office of the presidency, he felt he had to speak out “when things were said that were outright untrue and quite misleading.”

“I didn’t take any great pleasure in that,” Fauci said.

Fauci has accused Paul of spreading misinformation. Paul on his website has accused Fauci of “lying about everything from masks to the contagiousness of the virus.” Fauci during one hearing noted that Paul placed fundraising appeals on his website next to a call to have him fired.

Fauci said staying on until December allows for a search for a new director of NIAID, an institute with an annual budget exceeding $6 billion, and the appointment of an acting chief. Fauci also said he wanted to remain to help address an expected autumn upswing in COVID-19 infections.

Fauci made clear that while he will be leaving government service, he will not be retiring. He said in the future he hopes to use his expertise to help inspire the new generation of doctors to pursue careers in public health, medicine and science.

Reporting by Leroy Leo in Bengaluru and Julie Steenhuysen in Chicago; Additional reporting by Kanishka Singh in Washington; Editing by Will Dunham and Sriraj Kalluvila