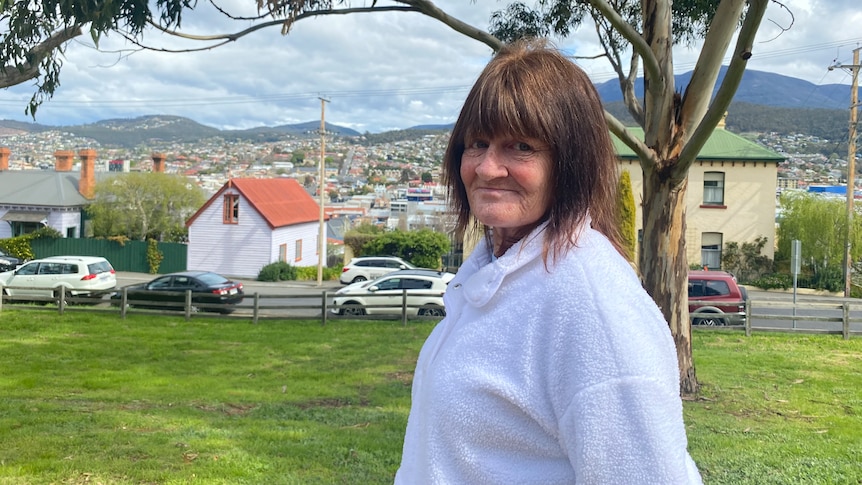 New Housing Connect data obtained by the ABC shows there are almost 50 applications for three and four-bedroom social houses in the suburb of Glenorchy, with the next greatest need in Claremont and Kingston.

These suburbs also have a high demand for smaller premises, including 151 applications for one-bedroom and 85 for two-bedrooms in Glenorchy.

Among those on the waiting list is Shelley Ford, who became homeless in mid-2020 after a relationship breakdown.

She could not afford the $350 a week rent in the private market and has couch surfed with family in Bridgewater with her 15-year-old niece, who she cares for, but who has struggled to stay in school due to the uncertainty.

They have spent time living in a tent at Fortescue Bay.

“It’s horrible. I feel for her every day. She breaks my heart, it’s not fair,” Ms Ford said.

She was offered brokered accommodation at a caravan park, which she was keen to accept, but was incorrectly told it would move her to the back of the list for social housing.

Since then, Ms Ford said she had almost no updates from her housing workers or Housing Connect.

“I see all these empty houses. I ring my worker and tell them about these properties, and yeah, nothing becomes of them,” she said.

‘Not knowing where you’re going to put your head down that night, and the next night, it’s just horrible, it’s sad.

“I’ve never been in this situation before.”

Looking far and wide for housing fails to get results

Social housing applicants can list as many suburbs as they like in their preferences, which Ms Ford said she had done for Hobart.

She has been on the social housing waiting list for 125 weeks, well above the rolling 12-month average of 70 weeks in Tasmania. This figure has also been steadily climbing in recent years.

He responded that the government would do “all we can” to support her, but Ms Ford said she has had little contact since.

Demand for social housing does not end at Hobart’s boundaries.

There are 19 applications for three-bedroom social housing in the Sorell council area, and 37 for one-bedroom. Derwent Valley and Huon Valley have similar levels of demand.

The government is pushing ahead with its plans for a new statutory authority, Homes Tasmania, which has passed the lower house and is due to be debated in the upper house this week.

Labor housing spokesperson Ella Haddad said the party remained opposed to this, with concerns there would not be any new powers for the government to fast-track affordable housing supply.

“Ten years is too long to wait for Shelley and for her family. Many people don’t have 10 weeks to wait, let alone 10 years, and the government needs to be doing more right now for emergency housing solutions,” Ms Haddad said .

“I think the government probably has good intentions, but the worry for many people working in the sector is that there won’t be any new powers for Homes Tasmania.”

Mr Barnett said Homes Tasmania was designed to take “what works so well” in the community housing sector to deliver more houses.

“It will also complement the significant investments we are making right now on immediate actions to help those in housing stress, investing $36 million each year on wrap around homelessness support, including specialist homelessness services, and Safe Spaces across the state,” he said.