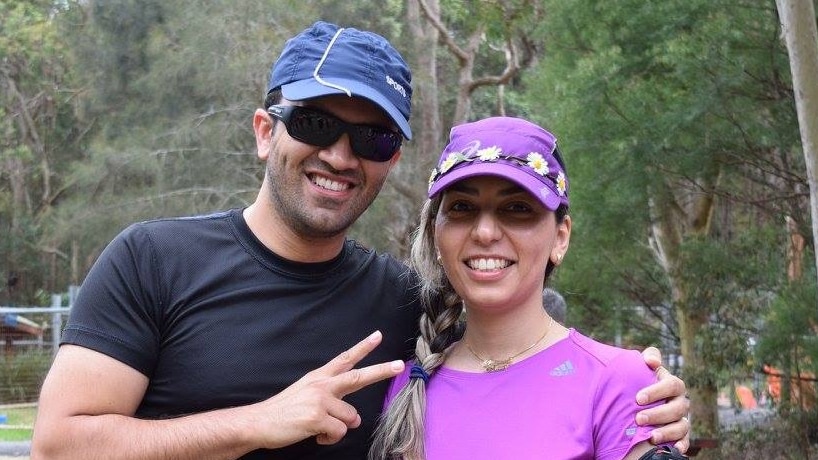 It’s a daunting thing to move across the world to a place you’ve never been before – especially if you don’t know anyone.

So, when Hanieh Kosari arrived in Australia from Iran to study, she was understandably wide-eyed and nervous as she faced the reality of becoming immersed in a new culture.

The then 28-year-old didn’t plan to be here eight years later, but the community she created has a magnetic pull.

“The goal was to do my degree, but on the way, different things came, and eventually changed my life,” Hanieh said.

Those life-changing events all started with a humble Saturday morning parkrun.

Where it all began

The year was 2014 and Hanieh had been in Australia for two weeks.

She was living with an Australian family and had a long road ahead, studying for a post-graduate degree in Environmental Engineering at the University of Newcastle.

Facing years of computer work, they encouraged her to go along to parkrun, a free five-kilometre run at a park down the road.

Hanieh wasn’t into running but wanted something to combat the stress of relocating, studying and sitting — a jog was exactly what she needed.

She says the atmosphere was a contrast to what she left behind in Iran.

“It’s not usual to see people out running in Iran, like we see here,” she said.

“It was exciting to see how many people were coming in fresh at 8am on a Saturday.

“They were all smiling and welcoming new people, and that was lovely.”

Hanieh met a lot of people at that very first parkrun at Blackbutt, but there was one stand-out.

Rahmat had been going to parkrun for a year before Hanieh came on the scene.

Also from Iran, he came to Australia to study. As fate would have it, Rahmat was enrolled at the University of Newcastle too. And it turns out, they had mutual friends.

“A lovely couple I met through my landlady invited me for breakfast after parkrun,” Hanieh said.

“That couple also invited my (now) husband to their house.”

And so they hit it off, and Hanieh’s first parkrun sparked the start of a relationship that blossomed, and eventually led to a marriage.

The couple wed in Iran and celebrated with their parkrun community when they got back.

They now also have a one-year-old son, Kian.

Hanieh and Rahmat both credit parkrun as being the catalyst for a community that helped them to settle in Australia.

“We know many people there now, and it was the start of a lot of friendships,” Rahmat said.

“You just have a family there.”

Dr Michelle Redford immigrated to Australia from the UK the same year as Hanieh, and they became friends through parkrun.

As a GP and parkrun Health and Wellbeing Ambassador, Dr Redford believes building a community is beneficial to your health and in finding your way in a new country.

“It’s critical in setting,” she said.

“I think unless you’re part of a community, your health is going to suffer, unfortunately.”

Dr Redford has completed more than 250 parkruns, volunteered over 30 times, and built her own community there, too.

So, as part of the parkrun practice initiative with the Royal Australian College of GPs, she’s confidant socially prescribing parkrun to her patients if it fits, including for those moving here from overseas.

“GPs have the ability to reach some of those harder-to-reach communities that could benefit the most,” Dr Redford said.

“Parkrun is a welcoming environment. It’s not really about the running, it’s more about coming along and being part of something on a weekly basis.”

And so much can come from turning up week in and week out.

A job interview, best friends and a baby shower

Along with meeting her future husband, Hanieh credits parkrun with finding that tight-knit group of friends that lift you up.

“A few lovely ladies I met at parkrun, they are now my best friends here in Newcastle,” she said.

Hanieh loves that she was given the opportunity of a weekly gathering, to get to know them.

She says they were there for her through the various lockdowns, and every step of the journey of having a baby.

“Those lovely friends who I made at parkrun planned and organized everything for a baby shower for me,” Hanieh said.

Again, when Hanieh was looking for work, she even got a job interview through her parkrun contacts.

“I was impressed to get that interview,” she said.

Rod Pickering is event director at Lake Mac parkrun, another of Hanieh and Rahmat’s locals.

With 180 runs and almost as many volunteer caps, he says parkrun is a community-oriented event and has been for many years.

“We’ve seen a lot of new people come along and fit straight into the community atmosphere that we promote,” Rod said.

“Every parkrun I go to, I find the same sort of community feel.”

Without parkrun, Hanieh doesn’t think she’d have the same support as she does now.

“I don’t think I could find these lovely people anywhere else,” she said.

Same goes for Rahmat, who didn’t think he’d still be living in Newcastle.

Thanks to parkrun ushering them into a community, they’ve both landed in a place they can call home.

ABC Sport is partnering with parkrun to promote the benefits of physical activity and community participation.