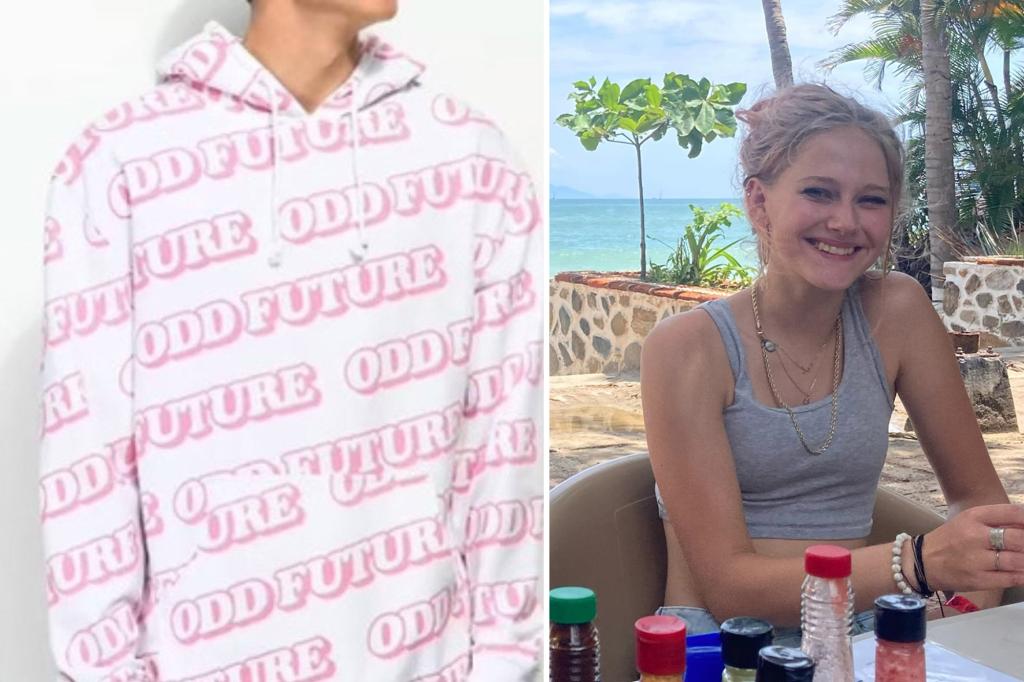 Missing California teenager Kiely Rodni was wearing an “Odd Future” sweatshirt at a campground party the night she vanished — the authorities revealed her cellphone last pinged near a lake.

The 16-year-old has been missing for more than a week after she was last seen at an end-of-school party near Prosser Family Campground in Truckee, just north of Lake Tahoe, in the early hours of Aug. 6.

The Placer County Sheriff’s Office said Sunday that they’d found footage of Rodni early on at the party wearing a pink and white sweatshirt with “Odd Future” — the name of a hip-hop band — emblazoned across it.

It wasn’t clear if Rodni was still wearing the sweatshirt when she went missing, the sheriff’s office said.

Authorities revealed last week that Rodni had also borrowed another hoodie at the party — with the Lana Del Ray lyrics, “You don’t want to be forgotten, you just want to disappear” scrawled across it.

As the frantic search for the teen entered its second week, the Nevada County Sheriff’s Office, who is assisting in the search, said Rodni’s cellphone last pinged at about 12.30 am on Aug 6. near Prosser Lake — a manmade reservoir that surrounds the campground.

“The ping for the data points was near the water. It’s hard to tell an exact pinpoint,” Captain Sam Brown said at press conference Saturday.

“Just because it was last pinged there, that doesn’t mean that’s where the phone stopped pinging,” Brown continued. “There’s lots of reasons why those notifications or data points could be lost.”

Rodni’s mom, Lindsey Rodni-Nieman, had revealed last week that her daughter sent her a text late on Aug. 5 saying she was leaving the party in 45 minutes and was coming “straight home.”

Search crews have been scouring the lake for days as part of the widespread search for the missing teen.

Brown said the deepest part of the lake is about 57 feet and visibility is low, adding that search crews are almost going “into the water blind.”

“Once you start maneuvering the ground, it’s like going through mud. These are tough operations,” he said.

Rodni was last seen at the campground between 12.30 am and 1 am, according to authorities.

They are treating her disappearance as a potential abduction because the car she was driving — a silver 2013 Honda CRV — hasn’t been found.

Her cellphone has also been out of service since the party.

Authorities have so far received more than 1,200 tips in the case, including one lead that turned into a dead end over the weekend.

Crews spent Saturday digging at a “burial site” based on one tip, but only ended up discovering the remains of a dog.

“It was located by a search-and-rescue ground team,” Placer County Sheriff’s Office public information officer, Angela Musallam, said of the burial site. “Kiely’s family was notified of the potential development.”

“The FBI responded to secure the scene yesterday and was accompanied by the Placer and Nevada county sheriff’s offices. The FBI agents investigated the site through early this morning and recovered the remains of a dog,” she added.