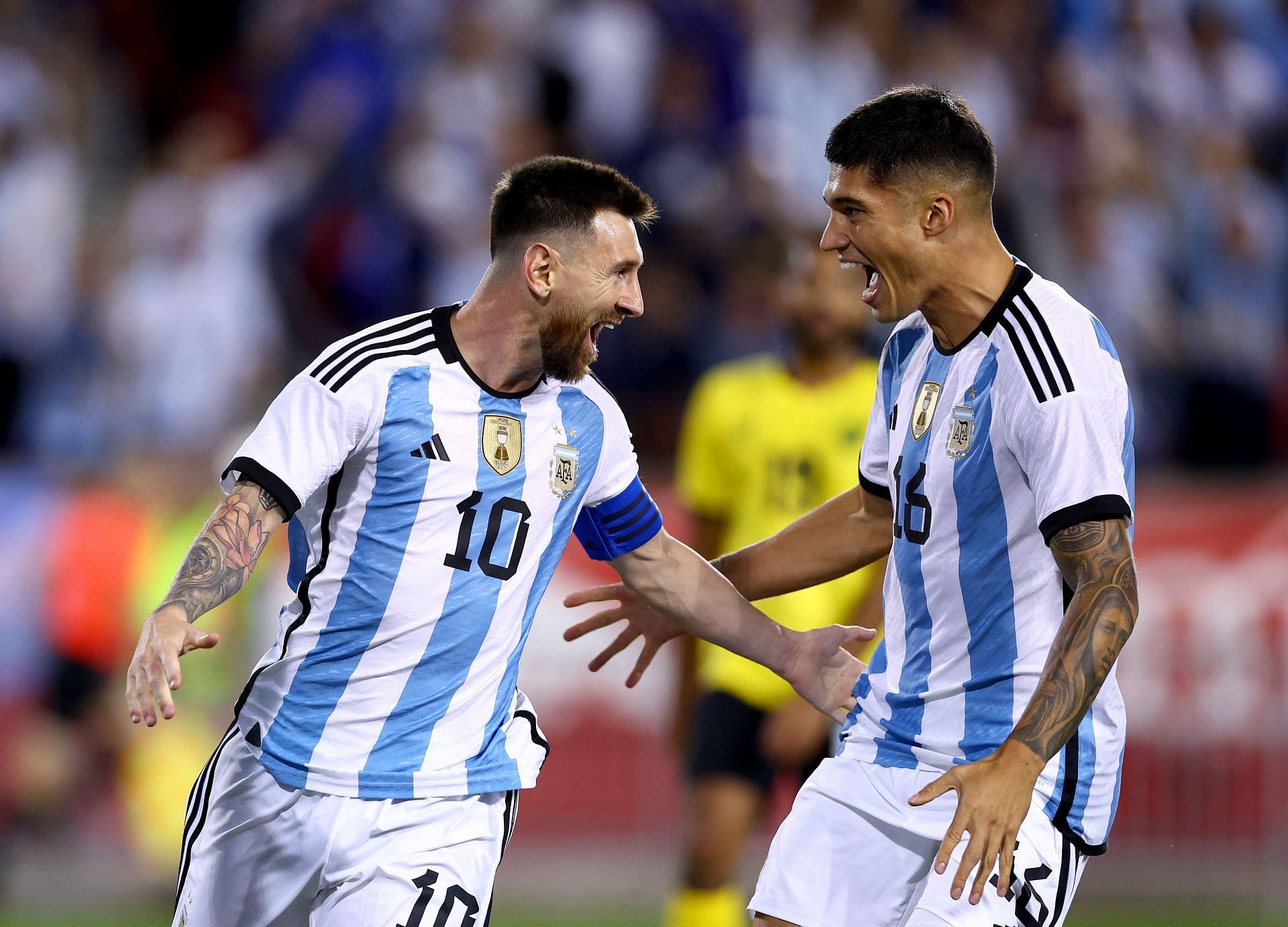 Looking to extend their unbeaten run to 35 games, Argentina took on Jamaica in their penultimate friendly fixture prior to the 2022 FIFA World Cup on Tuesday night (September 27). La Albieste gifted fans with a commanding display at the Red Bull Arena in the United States, securing a 3-0 victory. Julian Alvarez found the back of the net once before substitute Lionel Messi stole the show with a breathtaking brace late in the game.

Argentina, who beat Honduras 3-0 in their previous friendly on Friday (September 23), started the game slowly. Instead of taking the fight to Jamaica right from the whistle, they invited some pressure, hoping to exploit the space left behind. The strategy did not pay dividends, prompting Lionel Scaloni’s men to get on the offensive.

In the 13th minute, La Albiceleste scored a fantastic team goal, with Alvarez applying a simple finish after Lautaro Martinez set him up with a virtually unmissable opportunity. Six minutes later, the goalscorer teed up Giovani Lo Celso for a shot. The midfielder set himself up and went for Andre Blake’s goal with a curling effort, only to end up missing the target by a whisker.

The Reggae Boyz failed to carve out opportunities of their own in the first half, but they successfully kept Argentina from running away with the game.

Another Messi brace, another win for Argentina

Another Messi brace, another win for Argentina 🔥 https://t.co/6kVJXhbV0W

Argentine boss Scaloni made a couple of changes 11 minutes into the second half, bringing in Messi in Martinez’s place and subbing in Enzo Fernandez for Guido Rodriguez. In the 68th minute, Messi lodged his first shot on target, carrying the ball into the opposition third and letting fly from a tight angle. Blake was forced to turn the ball behind a corner.

Twenty minutes later, the country’s record goalscorer found the back of the net with a scintillating strike from over 20 yards away from the goal. Blake couldn’t react quickly enough to keep the ball from creeping in. Three minutes later, Messi doubled his tally, stunningly scoring from a free kick.

Argentina were not at their ruthless best on Tuesday, but Messi’s genius carried them to a comfortable victory. Here are five Argentine players who stood out in La Albiceleste’s friendly win over Jamaica on Tuesday:

In Messi’s absence, Angel Di Maria captained Argentina on Tuesday. He did not score or assist against Jamaica, but his overall gameplay was undeniably impressive. The Juventus man carried the ball with grace, stretched the game, and held his own dele in one-on-one situations.

Again, Thank You Di Maria for this one
super angel

Again, Thank You Di Maria for this oneSuper Angel https://t.co/6TEZnB9m5X

Picked ahead of Lisandro Martinez on Tuesday, Nicolas Otamendi made a strong case for himself in front of Scaloni. Otamendi was rock solid at the back, impressed onlookers with his pinpoint distribution from deep, and organized his backline with remarkable authority.

Argentina have conceded 0 GOALS in 795 minutes Emi Martínez, Otamendi and Romero played together 🤯

The Benfica star accurately delivered 13 of 15 long balls, made a key pass, and won three of four ground duels. He also made five clearances, intercepted the ball thrice, and attempted two tackles. All in all, it was a spotless display by the veteran center back.

Manchester City talent Julian Alvarez played stunning football against Jamaica on Tuesday night. In the 13th minute, he found himself in the right place at the right time to tap home Martinez’s pass. He also went on to create goalscoring opportunities for his teammates and helped out at the back from time to time.

Villarreal central midfielder Giovani Lo Celso was the standout midfielder on the pitch on Tuesday. His distribution was brilliant, he stood his ground in duels, was not afraid to get his hands dirty, and worked tirelessly all night long.

Gio Lo Celso has been the standout player in midfield for Argentina. The architect tonight.

Gio Lo Celso has been the standout player in midfield for Argentina. The architect tonight. https://t.co/qqAc6v2vHq

Seven-time Ballon d’Or winner Lionel Messi was introduced 11 minutes into the second half. As always, Messi spent the first few minutes getting acquainted with the tempo of the game. Once he did, the result was expectedly exceptional.

Messi scored two excellent goals in the 86th and 89th minutes, slotting the first one into the bottom corner from range and netting the second one from a free kick. The way he curled his low free kick around the wall from 18 yards out was a sight to behold.

In addition to bagging a brace, Messi also made two key passes, won five ground duels, attempted a tackle, and drew a foul.