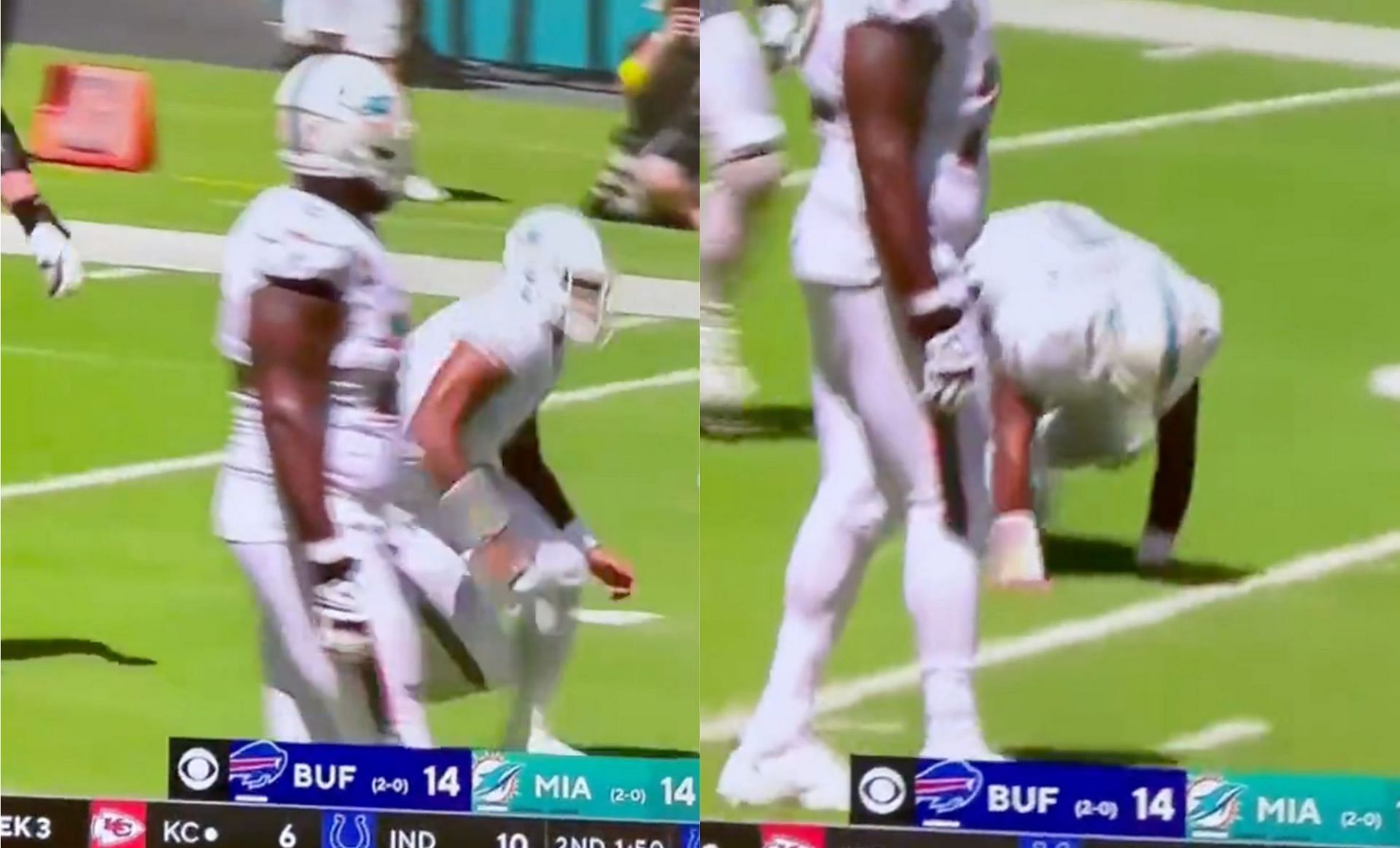 Tua Tagovailoa is coming off a career game in which he threw for over 450 yards and six touchdowns in an absurd game against the Baltimore Ravens. This week, he’ll be fortunate to return to the game after taking a hit from Buffalo Bills defending Matt Milano.

Tagovailoa released a pass before Milano took a few steps and pushed him to the ground. Upon impact, the Miami Dolphins quarterback’s head hit the turf hard. The flag was thrown for roughing the passer.

The quarterback struggled to get to his feet and jog up with the rest of his teammates. He also struggled to stay on his feet after the collision, stumbling back to the ground.

Oh no, scared for Your right now, doesn’t look good.

Oh no, scared for Your right now, doesn’t look good.https://t.co/iefLwI2PS6

It’s clear something is wrong, and it’s very likely that Tagovaiola received some sort of head trauma as a result of his helmet hitting the ground so hard. Here’s a look at the hit that Milano put on the quarterback, resulting in the injury and the flag.

Tua went to the locker room. Teddy Bridgewater is in.

Tua went to the locker room. Teddy Bridgewater is in.Here’s what happened.https://t.co/b3xsr7Eesf

The Dolphins quarterback is considered questionable to return, but that does seem like an overly optimistic outlook based on the video.

The quarterback’s injury was a concern for many reasons. Not only is he leading the league in passing yards, they are currently embroiled in a 14-14 tie at the half, an important game for the AFC South.

Even if it’s for just one game, the Dolphins can’t afford to lose Tagovailoa who appears to finally be rounding the curve and playing very well.

At the half, he had completed eight of 10 passes for 76 yards and a touchdown. He threw that touchdown to River Cacraft for 11 yards.

On the other side, Josh Allen is having yet another superb game. He’s thrown an astounding 32 passes, completing 25 of them for 225 yards and two touchdowns.

Devin Singletary leads all players with seven catches for 52 yards and a touchdown. The second touchdown went to Isaiah McKenzie, who has six catches for 63 yards and that score.

Both teams are 2-0, so this matchup will leave one remaining unbeaten in the AFC East and that team will have sole possession of first place. Even though it’s only Week 3, it’s a very important game.

He returned to action in the second half, completing his first pass to Tireek Hill for 22 yards.