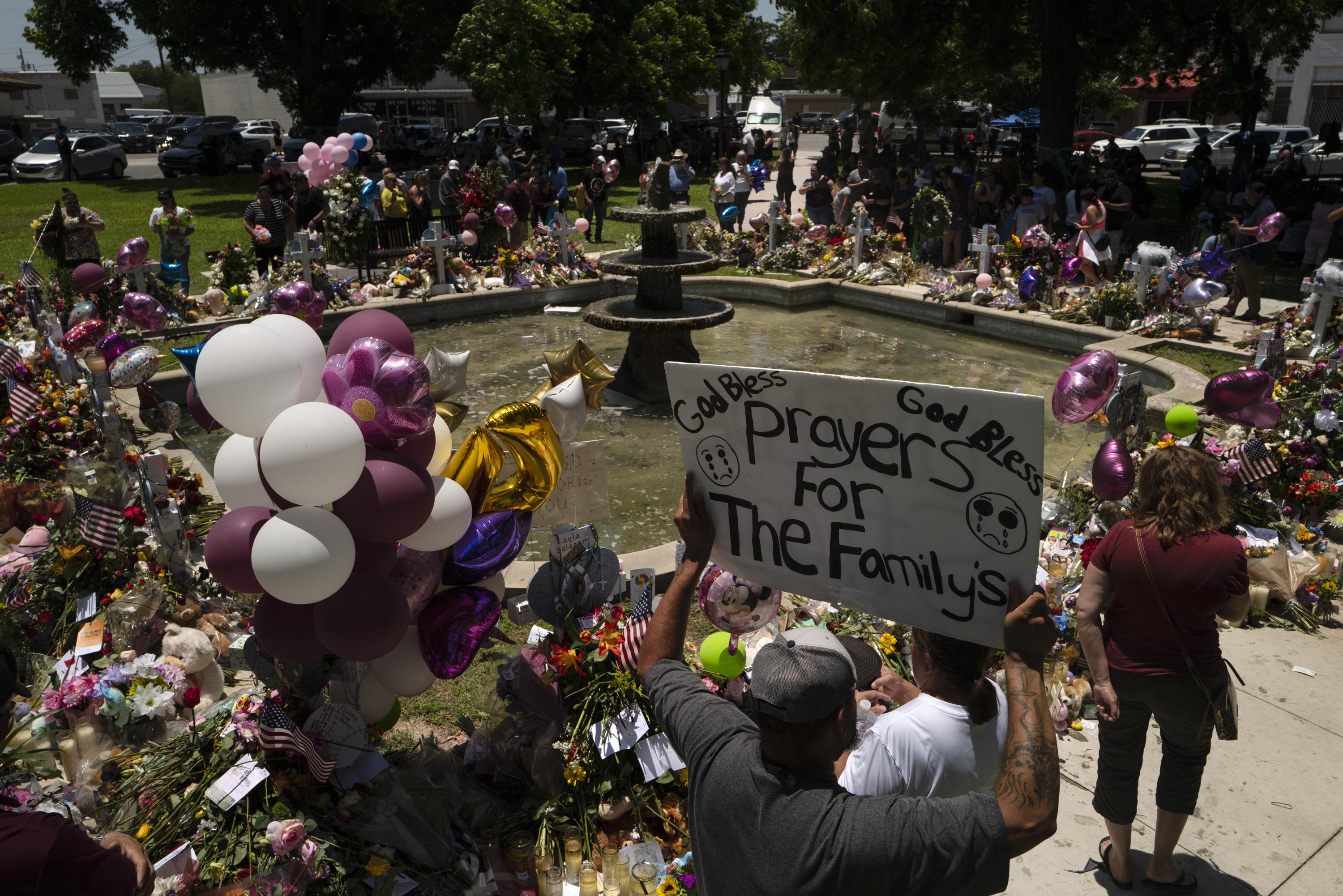 UVALDE, Texas (AP) — Days after a local man burst into an elementary school and killed 19 children and two teachers before officers managed to kill him, the signs of grief, solidarity and local pride are everywhere in Uvalde.

Many are wearing maroon, the color for Uvalde’s school district. And light blue ribbons adorn the giant oaks that shade the city’s central square, where mourners come to lay flowers around a fountain and write messages on wooden crosses that bear the victims’ names. In front of a day care center on one of the city’s main streets, 21 wooden chairs sit empty.

Everyone in the predominantly Latino city of roughly 16,000 people seems to know someone whose life has been turned upside down by losing a family member or close friend in the attack at Robb Elementary Schoolwhich was one of the deadliest of its kind.

Joe Ruiz, pastor of Templo Cristiano, said a teacher who is friends with his wife — herself a former Uvalde teacher — summed up the community’s mood best by saying people have “created out everything” they could and are now just tired and needing rest.

Police have come under heavy criticism for waiting more than 45 minutes to confront the 18-year-old gunman, Salvador Ramos, inside the adjoining classrooms where he unleased carnage.

As the investigation into the attack continues, including Ramos’ reasons for carrying it out, some residents have expressed anger toward the police. Among them is 24-year-old carpenter Juan Carranza, who said he watched the attack unfold from across the street from the school. The next day, he called the officers cowards.

Steven McCraw, who heads the Texas Department of Public Safety, said Friday that the school district’s police chief, Pete Arredondo, made the “wrong decision” to wait so long before sending officers into the locked classrooms. He said Arredondo, who was in charge of the law enforcement response during the siege, believed Ramos was barricaded inside the two adjoining classrooms and that children were no longer at risk. Arredondo, who graduated from Uvalde High School and was recently elected to the City Council, has n’t spoken publicly since McCraw criticized his decision-making, and his house now has a police guard.

Oasis Outback, where Ramos bought his guns, has stayed open and its barbecue restaurant did its usual brisk Friday night business. The gun shop at the back of its sporting goods section was temporarily closed out of respect to victims’ families, according to a posted sign.

An Oasis employee who declined to give her full name said the store has been getting angry calls blaming it for the attack, but the callers’ phone numbers were not from the area.

Support for gun rights is strong in Uvalde, which is roughly halfway between San Antonio and the border city of Del Rio. But some parents and relatives of victims are calling for change.

“I just don’t know how people can sell that type of gun to a kid 18 years old. What is he going to use it for but for that purpose?” said Siria Arizmendi, a fifth grade teacher whose niece, Eliahna Garcia, was killed. She spoke in her dining room shortly before Eliahna’s great-grandparents, also Uvalde residents, arrived.

Javier Carranza, a 43-year-old gun owner and Army veteran whose daughter, Jacklyn, was killed, said it was “kind of ridiculous” to sell such firepower to an 18-year-old and that better background checks are needed.

Uvalde sits amid flat fields of cabbages, onions, carrots, corn and peppers, but mechanized farming replaced many jobs. Construction material companies are among their most coveted employers.

The city is home to a Border Patrol station that operates a highway checkpoint and monitors freight trains in what has suddenly become one of the busiest corridors for illegal crossings. A massive camp of Haitian migrants that sprang up under a bridge in Del Rio last year made headlines around the world.

Many residents can trace their family’s presence in Uvalde through three or four generations, creating a cherished sense of community. On one Friday night each month, stores stay open late and food vendors occupy the central square outside a neoclassical courthouse.

“Uvalde Strong” messages adorn store windows, T-shirts and lawn signs. Curbs and sidewalks are less common the farther one gets from the central square, with roosters walking on cracked pavement near Robb Elementary School.

Ruiz, the Templo Crisitano pastor whose children and grandchildren live in Uvalde, asks new parishioners about their ancestry to get to know them better.

Before Tuesday, occasional traffic deaths were the biggest tragedies to fall Uvalde.

“We’ve had individuals murdered, but not on a mass scale like this,” said Tony Gruber, pastor at Baptist Temple Church.

For more AP coverage of the Uvalde school shooting: https://apnews.com/hub/uvalde-school-shooting